This year, the kids and I did handmade gifts for Father’s Day.

Prithvi baked a chocolate cake from scratch and it was yum-o-delicious!  It was actually quite the feat for a first cake and I’m amazed at how fantastic it turned out.  Kiki made a card and a picture frame-esque thingy with a photograph of her and daddy.  The card was begun at preschool and she finished it off at home, with a whole bunch of squiggles which she said was her special “letter”.  I’m biased, but… awww!

I wish I’d taken pictures but the cake has been polished off and the card and photograph thingamajig has gone to dad’s desk at work.

My pressie was a hat.  I knew I wanted to knit a cabled beanie and it had to be knit using a chocolate-y skein of tosh dk.

A sweep of online patterns just wasn’t giving me what I was looking for and so I cast on for X number of stitches and just began winging it.  The fun about cables in a hat is that it’s so quick and if you mess up, you just have to rip out a few rounds and fix your mistake.  Before I knew it I was doing the crown shaping and ready to weave my yarn through those last few stitches.

I was well under the wire, Father’s Day was still 3 days away!  Stress-free gift knitting, I love that!

I will probably knit this again and lengthen it a bit more.  There is actually an extra round (or maybe 2??) on the last cable repeat and I noticed it as I was finishing the last set of decreases.  I didn’t bother ripping though, hehe!  Also, the crown shaping needs some TLC (ok, a lot of TLC) because up close it looks like a chicken went nuts with the yarn and needles.

It’s going to be a while before this hat sees the light of day.  It’s a wool hat and tomorrow is the first day of summer, yeehaw!  But that’s ok because I am so, so, so thrilled that my guy loves his hat! 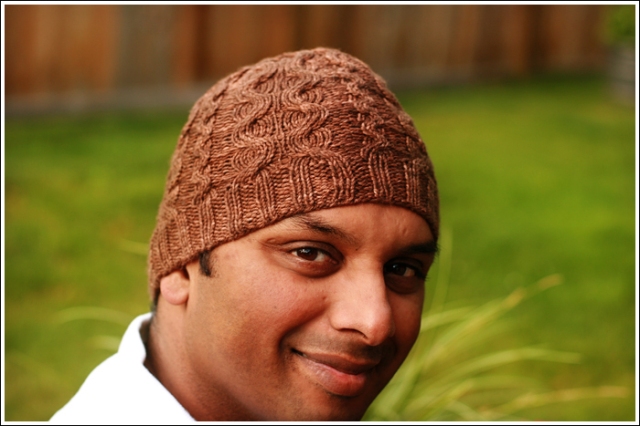